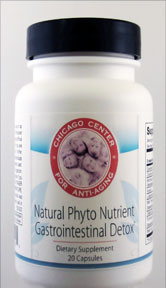 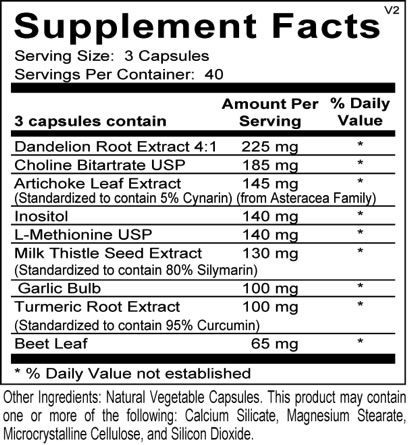 Other Ingredients
Natural Vegetable Capsules. This product may contain one or more of the
following: Calcium Silicate, Magnesium Stearate, Microcrystalline Cellulose andSilicon Dioxide.

Rationale
Phytocore was created as part of The Core Restore BT Kit. Phytocore supports phase I and phase II detoxification by providing phytonutrients to help eliminate toxins and stimulate the liver during a 7-28 day detoxification program.

Research Findings
Overview of Detoxification:
• There are two main pathways of detoxification in the liver, known as phase I and phase II. In phase I, non-reactive compounds undergo specific reactions which use oxygen to form a reactive site on the compound. This new intermediary metabolite must then undergo a phase II reaction, which results in the addition of a water soluble group to the reactive site. The end result is a compound that is now able to be excreted in the urine, bile, or stool.1
• The phase I detoxification pathway is mainly composed of the cytochrome P450 family of enzymes.2
• Proper function of both phases is essential for detoxification. Increased phase I activity and or decreased phase II activity has been associated with an increased risk of health related issues.2
• Some nutrients have been found to play supportive roles in the detoxification pathways including: artichoke, turmeric, silymarin, garlic, radish root, and many vitamins and minerals.1
Silymarin (Milk Thistle Extract):
• Silymarin is a well known hepatoprotective agent. It has been shown to lower elevated enzyme levels, ease the toxic effects of specific drugs on the liver, and posses anti-inflammatory properties.3
• Silymarin has been shown to play a protective role in the oxidative damage induced by some environmental contaminants such as benzopyrene.
• During the detoxification of some environmental toxins, the major reactive oxygen species generated is hydrogen peroxide. In an in vitro study, silymarin was found to have substantial protective effects attributed to free radical scavenging mechanisms, against exogenous hydrogen peroxide induced oxidative stress damage.4
• An in vivo study showed that silibinin, an active component of silymarin, was able to increase phase II enzyme activity in the liver of rats.5
Artichoke
• Artichoke is a well known choleretic and antioxidant agent, it is often used to increase bile secretion, as an antioxidant, and to support general liver health.
• In a double-blind cross-over study in 20 men and women, artichoke extract increased bile secretion.6
• Artichoke extract protected HepG2 rat cells exposed to peroxide generated in situ by glucose oxidase from oxidative stress, it also prevented the loss of total GSH and the accumulation of malondialdehyde.7
• The effects of artichoke extract on carbon tetrachloride induced oxidative stress and hepatotoxicity in rats was studied. In rats pretreated with artichoke extract, hepatic malondialdehyde and diene conjugate levels decreased and GSH levels increased.
Curcumin
• Curcumin is a potent antioxidant from turmeric, a traditional spice often used in Middle Eastern cooking. Curcumin has been found to have chemoprotective and anti-inflammatory activities.
• Curcumin has been shown to increase glutathione S-transferase, a phase II detoxification enzyme, activity in rodent liver.9
• In an in vitro study examining the effects curcumin has on lymphocytes loaded with arsenic, it was found that curcumin counteracted the damage of arsenic by quenching reactive oxygen species and increasing enzymes like catalase, superoxide dismutase and glutathione peroxidase.10
Methionine and Choline
• Studies show diets deficient in methionine and choline result in liver injury similar to human non-alcoholic steatohepatitis and hepatocellular carcinoma.11,12
• Mice fed a methionine-choline deficient diet were found to have increased fatty acid uptake and decreased VLDL secretion.
The authors conclude these are two mechanisms by which a methionine-choline deficient diet promote intrahepatic lipid accumulation in animals.12
• In a study involving Mexican American men it was found that 550 mg/d of choline is sufficient for preventing elevations in serum markers of liver dysfunction in this population.13
Garlic
• Garlic is a well known spice used in cooking. Through out history, garlic has been used for a number of conditions including fevers, colds, parasitic infections, cardiovascular health, and as an immune supporting agent.
• In a study looking at the effects garlic has on cells loaded with arsenic, it was found that garlic was able to return reactive oxygen species generation to normal values in hepatic tissue.14
Radish Root
• Black radish is a member of the Cruciferae family. Radishes, along with other Cruciferae vegetables, contain glucosinolates which have been shown to promote liver health.
• Spanish black radish extract has been shown to increase the activity of phase I and II detoxification enzymes, including quinine reductase, in human liver cells.15
Dandelion Root
• Dandelion root has many historic medicinal uses. Dandelion has been used as a choleretic and to treat liver and spleen aliments.
• The German Commission E and European Scientific Cooperative for Phytotherapy have approved the use of dandelion root for the restoration of hepatic and biliary function.16
• Studies done in rats, have shown that dandelion root given intraduodenally increases bile secretion.16

Dose
As a dietary supplement, take 2-3 capsules two times per day or as recommended by your health care provider.

Contraindications, Adverse or Other Reactions
Do not take this product if you are pregnant or nursing.

How can I purchase this Natural Phyto Nutrient Gastrointestinal Detox Vitamin?