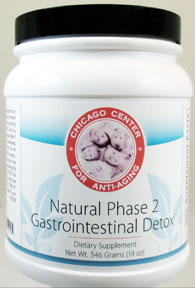 Research Findings
Overview of Detoxification:
• Few clinical studies have been done in humans on the detoxification process. There is limited research on the selected nutrients and associated detoxification pathways.
• There are two main pathways of detoxification in the liver, known as phase I and phase II. In phase I, non-reactive compounds undergo specific reactions which use oxygen to form a reactive site on the compound. This new intermediary metabolite must then undergo a phase II reaction, which results in the addition of a water soluble group to the reactive site. The end result is a compound that is now able to be excreted in the urine, bile, or stool.1
• The phase I detoxification pathway is mainly composed of the cytochrome P450 family of enzymes.2
• Proper function of both phases is essential for detoxification. Increased phase I activity and or decreased phase II activity has been associated with an increased risk of health related issues.2
• Some nutrients have been found to play supportive roles in the detoxification pathways including: flavonoids, amino acids, glycine, taurine, NAC, and many vitamins and minerals.1
N-Acetyl Cysteine:
• NAC is a sulfhydryl containing (contains sulfur and hydrogen) compound that is commonly used to support liver health. Because of this sulfhydryl activity, NAC stimulates glutathione production and is used in one of the 6 phase II detoxification pathways called glutathione conjugation (the attachment of glutathione to the toxin).3
• In vivo studies show that NAC has direct effects on certain mutagenic/carcinogenic toxins that prevents them from converting to more toxic substances.4
Glycine:
• One of the 6 phase II detoxification pathways is amino acid conjugation (the attachment of amino acids to the toxin). Glycine is one of the amino acids used in this process. Glycine also aids in glutathione conjugation.1
Taurine:
• One of the 6 phase II detoxification pathways is sulfation (the attachment of sulfur-containing compounds to the toxin). Taurine provides a good source of sulfur.5
• Taurine has direct detoxification properties with specific substances such as endotoxins, carbon tetrachloride, and
hypochlorous acid.5
• Taurine is commonly used to support liver health. Studies show taurine effectively conjugates bile acids and is often used in
hepatitis patients.
Lipoic Acid:
• Lipoic acid is a potent antioxidant. Lipoic acid increases glutathione, vitamin E, and vitamin C levels in the body.6
• In vitro, lipoic acid induced the upregulation of phase II detoxification enzymes including NAD(P)H,quinine oxidoreductase, and glutathione-S-transferase.7
• Lipoic acid has been used to detox mycotoxins (toxic byproducts of fungi and molds). Some mycotoxins have been found to mimic xenobiotics in their destructive effects on the body and in their routes of detoxification.8
Green Tea Extract:
• Green tea extract is a potent antioxidant that has phase II stimulating properties. Green tea also contains high levels of beneficial polyphenols.
• In vivo studies have shown that green tea extract increases phase II enzymes such as glutathione S-transferases, NAD(P)H:quinine reductases, epoxide hydrolases, and UDP-glucuronosyltransferases.9
Rosemary:
• Rosemary contains polyphenols that are potent antioxidants and also have anticarcinogenic properties.10
• Two principle mechanisms have been found in the detoxification actions of rosemary. One, it inhibits the metabolic activation of procarcinogens catalysed by the phase I cytochrome P450 enzymes and two, it induces phase II enzymes.10,1
Ellagic Acid:
• Ellagic acid is a polyphenol found naturally in plants such as grapes, pomegranates and raspberries.
• Ellagic acid has been found to induce phase II detoxification enzymes.11,12,13
Vegetable Antioxidant Blend:
• VitaVeggie® is a blend of broccoli powder, broccoli sprout extract, tomato powder, carrot powder, spinach powder, kale powder, brussel sprout powder, and onion extract. It is high in ORAC value and also contains sulphoraphane and glucosinolates.
• In an in vitro study, VitaVeggie® stimulated quinine reductase, the most recognized enzyme belonging to the phase II detoxifying proteins group.14
• Cruciferous vegetables including broccoli, kale, and brussel sprouts increase the enzyme activity of both phase I and phase II detoxification.15
• Sulforaphane has been shown to activate phase II detoxification enzymes in vitro.16
• It is believed that one of the main anticarcinogenic benefits of fruits and vegetables is due to the increase of phase II detoxification enzymes.1,17
Schizandra Berry Extract:
• In animal studies, Schizandra enhances liver detoxification pathways by increasing liver reduced glutathione levels as well as glutathione reductase and glutathione S-transferase activity.18
Fiber/Psyllium Husk:
• Psyllium husk is from the plant Plantago ovata and largely used for its fiber content. Psyllium husk contains a large amount of soluble fiber per volume. Psyllium is used to improve GI transit time, in GI related health issues, and for cardiovascular support.
• Studies show psyllium husk powder upregulates genes involved in bile acid synthesis and binds to bile-acids in the intestines to gently remove them from the body.19,20

Dose
As a dietary supplement, mix 2 scoops (40.18g) of Core Support with 8 oz. of water or the beverage of your choice 2 times
daily.

Contraindications, Adverse or Other Reactions
Do not take this product if you are pregnant or nursing. NOTICE: Without drinking enough liquid, this product may swell in throat, causing blockage or choking.

How can I purchase this Natural Phase 2 Gastrointestinal Detox Vitamin?