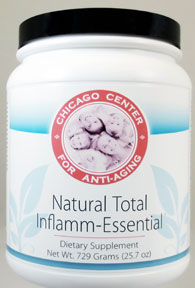 Dosage
As a dietary supplement, mix 2 scoops of InflammaCORE with water or the beverage of your choice, once daily or as recom­mended by your health care professional.

Contraindications, Adverse or Other Reactions
Do not consume this product if you are pregnant or nursing. Consult your physician for further information. This product contains corn.

How can I purchase this Natural Total Imflamm-Essential Vitamin?