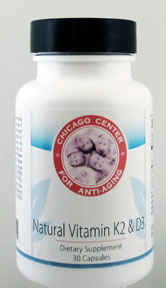 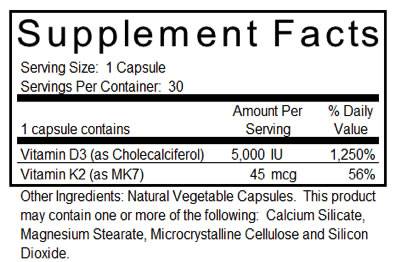 Other Ingredients
Natural Vegetable Capsules. This product may contain one or more of the following: Calcium Silicate, Magnesium Stearate, Microcrystalline Cellulose and Silicon Dioxide.

Formula Rationale:
Osteocalcin is an important bone building protein. In order for osteocalcin to be utilized by bones it must first be carboxylated, a process that requires vitamin K. Vitamin K2 with D3 provides a synergistic approach to bone health.

hours at doses of at least 150 mcg, and at 24 hours the difference was significant at all doses. This study shows that doses of 100 mcg of MK7 are available in the body for 24 hours following ingestion whereas vitamin K1 does not stay in the system as long.

K2 were assigned to each food/beverage. It was found that those with adequate intakes of menaquinone (the mid and upper tertiles) had a reduced relative risk of CHD mortality compared to the lower tertile and was also inversely related to all cause mortality and severe aortic calcification. Vitamin K1 intake was not related to any of the outcomes.3
Natto is a MK7 rich food. One study examined the effects of natto on the risk of fracture in three different populations of women (Japanese women in Tokyo, Hiroshima, and British women). Japanese women in Tokyo consume large amounts of natto and were found to have serum MK7 concentrations at 5.26+/-6.13 ng/mL, in Japanese women in Hiroshima the
concentrations were 1.22+/- 1.85 and 0.37+/-0.2 in British women. Women with higher serum concentrations of MK7 (those with high natto consumption) were found to have a reduced risk of hip fracture.7
Vitamin D:

Dose
1 capsule per day or as recommended by your health care professional.

Contraindications, Adverse or Other Reactions
Class 2. Caution is advised for those who are on blood thinning medications such as Coumadin and Warfarin. Exceeding the
recommended dose is not advised.

How can I purchase this Natural Vitamin K2 & K3?